What You Need to Know About Current Mortgage Rate Trends

The following table shows current Ashburn 30-year mortgage refinance rates. You can use the menus to select other loan durations, alter the loan amount, set your home value, select purchase loans, or change your location.

What is the Federal Reserve?

The Federal Reserve monitors and sets standards for monetary policy in the United States. There are 12 Federal Reserve Banks located in major cities around the country. Although the Federal Reserve undergoes reviews by Congress, the organization is an independent entity. Therefore, they do not need the President’s approval or any other branch of government before making decisions about the economy.

There are seven members of the board. Each member is appointed by the President to the Board of Governors and serves 14 years. They can be reelected. The board is headed by a President and Vice President. Each can hold office for 4 years and can be reappointed by the Senate. Janet Yellen currently serves this role and is the successor to Ben Bernake. Alan Greenspan held the position prior to him.

The Federal Reserve monitors and generates income from several entities. They earn dividends on foreign currency, loan interest collected, services, and interest from government securities. If the Federal Reserve posts a profit above and beyond its operating costs, then those funds are redirected to the U.S. Treasury.

How Are Interest Rates Determined?

Typically the Federal Reserve sets short term interest rates and longer dated Treasury bonds trade at a premium to those rates to reflect the duration and inflation risks. The 30-year mortgage typically trades at a slight premium above the 10-year treasury. The reason the longer duration mortgage rates are based on the shorter duration trasury rate is most homeowners tend to move or refinance roughly every 5 to 7 years.

Where is the Market Headed? 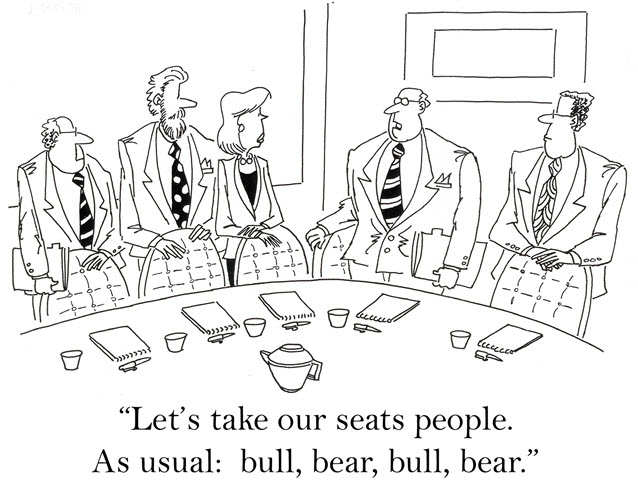 Expert economists predicted the economy would rebound in 2010. However, the economy was sluggish with slow growth rates for many years beyond that. The economy contracted in the first quarter of 2014, but in the second half of 2014 economic growth picked up. The Federal Reserve tapered their quantitative easing asset purchase program & the price of oil fell sharply. Consumer perception of inflation and inflation expectations are set largely by the price they pay at the pump when they refill their gas. With growth picking up the consensus view is interest rates will continue to head higher for the next couple years into 2020, or until a recession happens. The following table highlights 2019 rate predictions from influential organizations in the real estate & mortgage markets.

Despite being old data, the above predictions remain published on this page to show how significantly off major industry associations and leading experts at companies worth billions of dollars can be even in relatively benign environments. The average rate predicted for 2019 was 5.13% while the actual average rate throughout the year was 3.94%.

Industry experts can be that far off in relatively benign conditions. A true crisis can make accurate predictions nearly impossible.

As the COVID-19 healthcare crisis swept the globe governments pushed lockdowns which contracted many economies at record rates. In the second quarter of 2020 the United States economy contracted at a record annualized rate of 31.4%.

As the global economy crashed the Federal Reserve's FOMC cut interest rates twice, announced they would conduct unlimited quantitative easing, and gave forward guidance suggesting they were unlikely to lift rates through 2023.

As the Federal Reserve bought Treasury bonds and mortgage-backed securities while the economy cooled mortgage rates fell to new record lows. On the week of November 5th, the average 30-year fixed-rate fell to 2.78%. 2020 is expected to be a record year for mortgage originations with Fannie Mae predicting $4.1 trillion in originations and refinance loans contributing $2.7 to the total.

Most consumers obtaining mortgages to purchase a home opt for the 30-year fixed-rate mortgage. It completely dominates the purchase market.

If one looks exclusively at purchases FRMs are about 90% of the market. 30-year loans are also a popular choice for refinancing homeowners, though the 15-year option is also popular with people refinancing their loans. The following chart shows the blended overall market condition, but if you can compare it against the above chart you can visualize how 15-year loans are much more popular for refinancing than for initial home purchases.

In 2017 there were about $600 billion in mortgage refinance loans & $1.09 trillion in purchase mortgages, so purchases were nearly 2/3 of the market while refis were slightly more than 1/3 of the market. As rates are expected to keep rising, refinance is expected to make up a smaller share of the overall market.

The amount of new loans to refinance a home was expected to drop to $430 billion, down 28.3 percent from 2017, while the amount of new mortgages to buy a home will likely increase by 7.3 percent to $1.2 trillion, MBA said.

Largest Cities Across the United States

There are over 300 cities across the United States which have at least 100,000 residents.

Over 40% of these cities are located in just 3 states: California, Texas & Florida.

Typically during economic expansions real estate prices increase faster in large cities than they do in rural areas. Here is a table of cities & Census Designated Places across the United States with a population above 100,000.

Mortgage rates vary depending upon the down payment of the consumer, their credit score, and the type of loan that will be acquired by the consumer. For instance, in February, 2010, the national average mortgage rate for a 30 year fixed rate loan was at 4.750 percent (5.016 APR). The 15 year fixed was at 4.125 percent (4.312 APR) and the 5/1 ARM was at 3.875 percent (3.122 APR). These prices are just a snapshot of the average and will constantly change day to day, though the relative values will remain roughly the same. Namely, longer duration debt & fixed rate loans are typically charged a higher initial interest rate to lock in the certainy. This relationship makes sense because homeowners have the ability to refinance a fixed rate mortgage if rates drop, but if interest rates increase lenders have no way to adjust the fixed rate upward.

The general rule of thumbs are

The Consumer Fiance Protection Bureau offers a home buyer's checklist and a free online tool for checking typical mortgage rates within your state for a given credit score range. 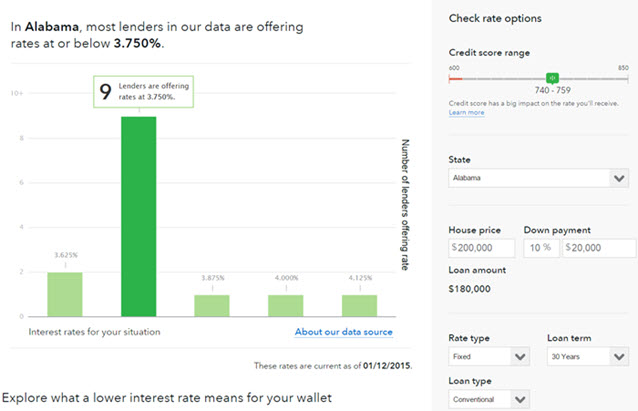 These loans are typically available in 15 year and 30 year loan options. The rates are higher than variable rate loans, as consumers pay a premium to lock in the security of a fixed rate while maintaining the ability to refinance. The longer the term, the higher the rate, because banks will lose money as purchasing power decreases due to inflation.

Adjustable rates are typically lower than fixed rates when the loan is initially established. ARMs may adjust on a monthly basis in keeping with the Federal Reserve or on a bi-annual or annual basis. The consumer should be aware that as interest rates increase, so will their monthly payments. While ARMs may be appealing because the initial rates are lower, ARMs can also be a gamble. ARMs may be beneficial to investors or consumers who only plan to keep the loan for a short period of time. During that time, the consumer can enjoy low interest rates.

Compare fixed, adjustable & interest-only mortgages side by side.

The FHFA offers an interactive map of conforming limits by county. A static version of the map is included below. 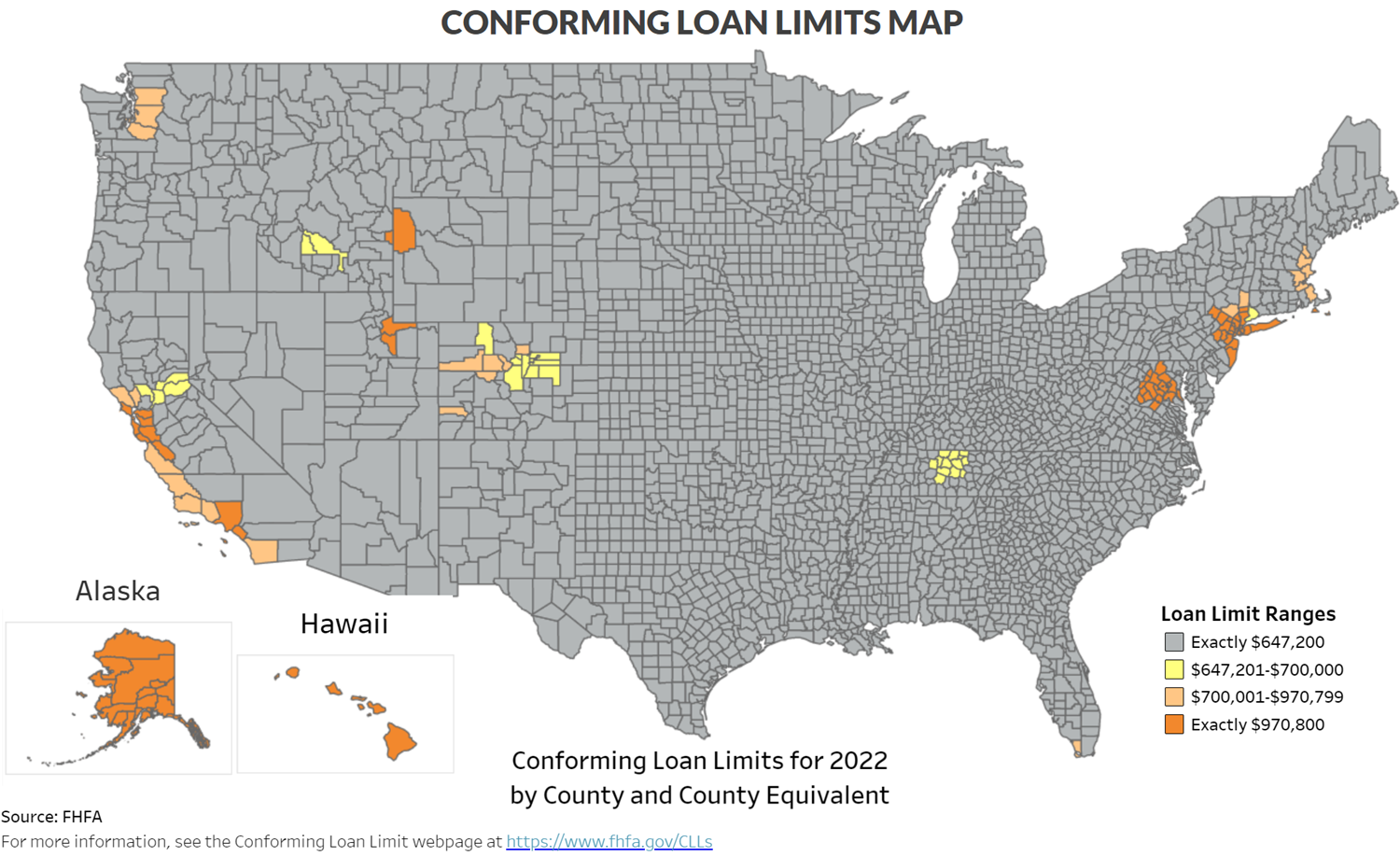 The FHA secures loans made by private lenders. These loans are provided to Americans who have a low to middle income. This loan is available to those people who cannot afford a large down payment or higher interest rates. Interest rates for these loans are lower than the national average for a fixed rate loan. Individual banks determine the interest rates; therefore, the consumer should do research prior to accepting a loan at a particular bank. The consumer can receive a loan for as little as 3 percent down and also receive as much as 6 percent on closing costs. This means that the consumer can borrow up to 97 percent of the cost of the home.

USDA loans can help people with low incomes in rural parts of the state qualify for a subsidized low-interest loan.

During the fixed rate period of a hybrid ARM, the consumer can enjoy the low interest rates and low payments. However, individuals who are not prepared may see an increase in their loan premiums that they cannot afford.

ARM interest rates change each month with the Federal Reserve. This loan is typically recommended for a short term investor who will sell quickly.

Fixed rate loans are by far the safest loans for consumers over a period of time.

When is the best time to obtain a mortgage?

The best time to secure a mortgage or refinance is when the rates are the lowest. Compare the National Mortgage Rate average over the past 10 to 20 years. If the rate is at one of its lowest points historically, then it can be a safe entry point into the market. Many investors over-extended themselves by purchasing multiple properties when prices were high. If the market turns, the home buyers may owe more than the house is worth. Those who wish to sell cannot fully recoup the costs of the home. Therefore, instead of having equity in the home, consumers owe more than the home is worth. Many individuals, in this instance will negotiate with the bank and “short sell” in order to relieve themselves of the debt.

A person who is making a purchase where they are using a large down payment or paying cash would likely be better off buying when mortgage rates are higher, since most people (who may compete to buy the same property) budget based on the montly payment rather than the total price of the house.

Below is a chart of historical montly mortgage rates from the Federal Reserve Economic Data series.

A home is not just an asset, but also has many costs beyond financing; including regular repairs, homeowner's insurance, and property taxes.

If your down payment on a conforming loan is below 20% of the home's value you will likely be required to carry private mortgage insurance (PMI) until the loan's balance is below 80% of the home's value. Government loan programs like FHA and VA loans do not require PMI, however they have their own seperate insurance requirements, which may require the insurance to remain throughout the duration of the loan.

Beware of ARMs. The interest rates will typically increase after the introductory period and may cause a home buyer financial stress when the rates increase. Some individuals even foreclose when this happens, because they cannot handle the increased payments.

Purchasing mortgage discount points can be a viable option if you are fairly certain you will live in the house for many years. However, if you move after a couple years then paying a significant upfront fee to lock in lower rates for the life of the loan will be money wasted.

Ashburn Homeowners May Want to Refinance at Today's Low Rates & Save

Contact New American Funding today to see how much you can save.

Ashburn Homeowners May Want to Refinance at Today's Low Rates & Save

Contact New American Funding today to see how much you can save.