Use this free tool to compare fixed rates side by side against amortizing and interest-only ARMs. This calculator includes features like property taxes, PMI, HOA fees & rolling closing costs into the loan. If you are looking for the core principal and interest payments without these other aspects then set the other variables to zero to exclude them from your calculations.

At the bottom of the calculator there is a button to create a printable amortization schedule. It lists all 3 mortgage types in the resulting page. The monthly payments displayed in this table are the core principal and interest payments. You can click here to view current rates for various loan options.

The above calculator quickly allows you to see "at a glance" loan information. If you would like to visually graph the results, please use the following calculator.

Understanding The Types of Mortgages Available 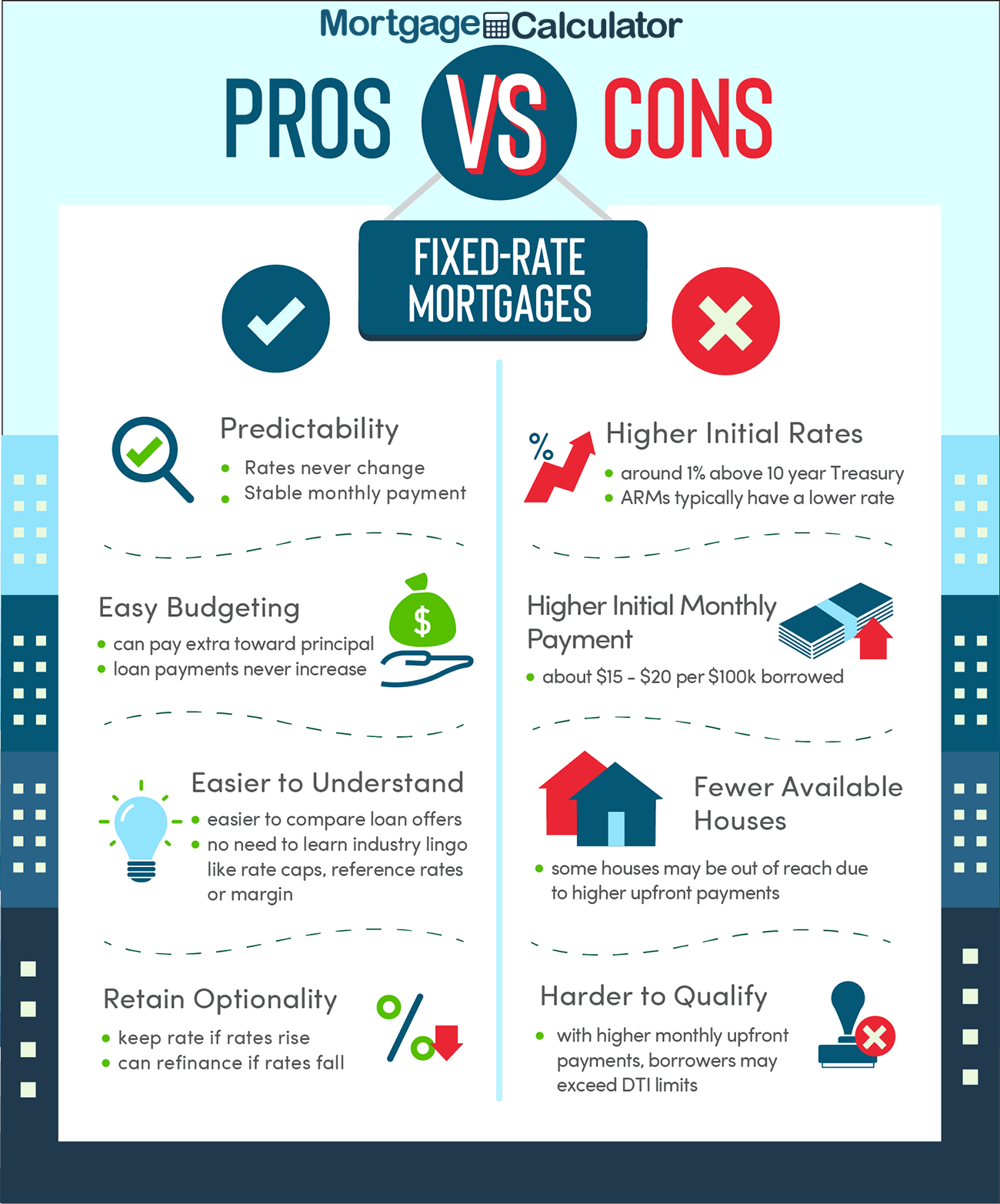 Fixed-rate mortgages are the most common way to finance a home in the United States. They allow home buyers to lock in a set APR and stable monthly payment for the duration of the loan.The most popular term is the 30-year mortgage, but the 15-year option is not uncommon.

The primary benefits of FRMs are

The drawbacks of FRMs are 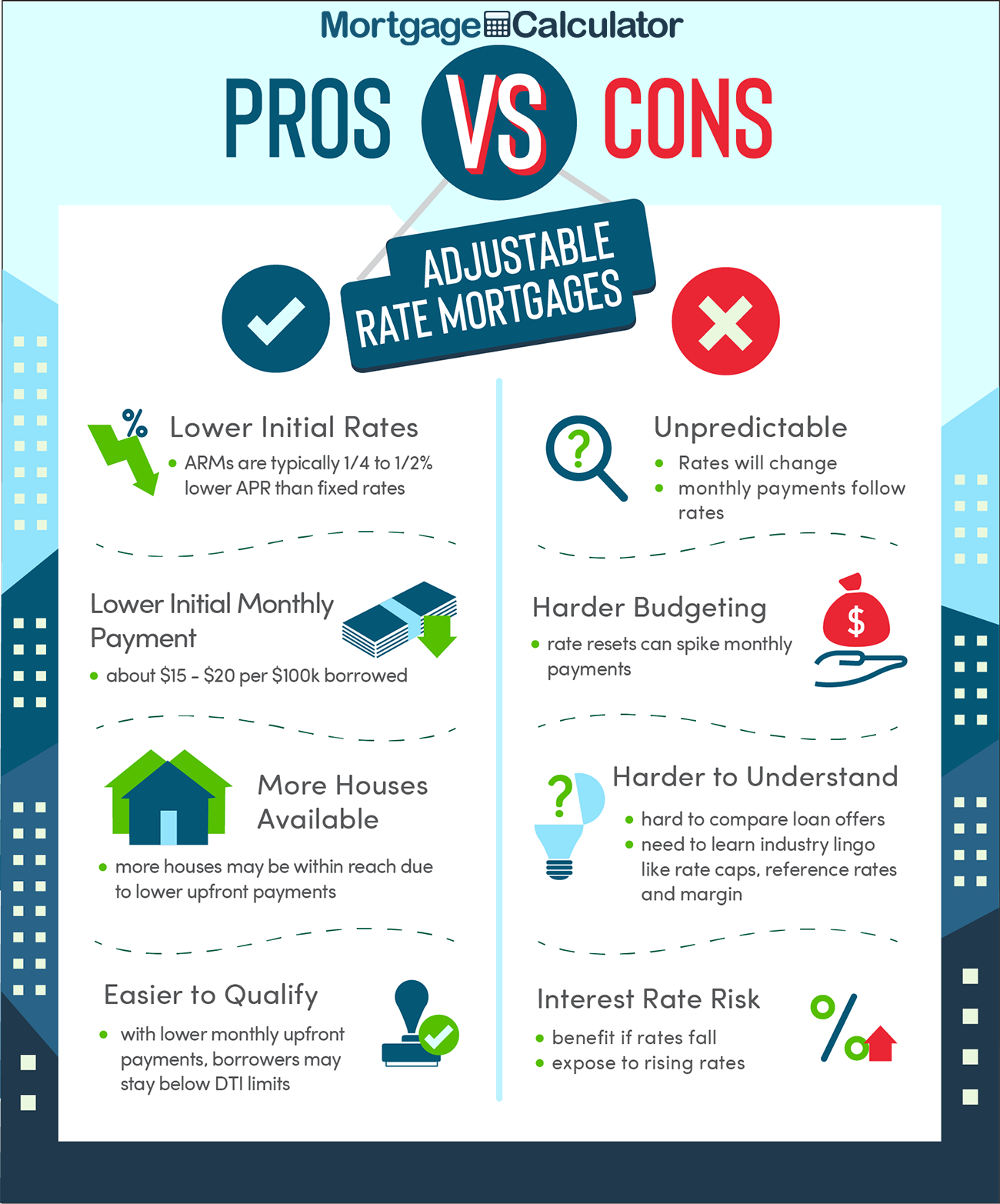 Do you know what they call an adjustable-rate mortgage in Europe?

That's because homebuyers in most of the civilized world have only one option when financing a house, the ARM, often called a variable rate mortgage outside the United States.

In the US, we can choose between an ARM and a FRM, and because the latter offers the security of an unchanging APR with no surprises, it's more popular.

However, there are hundreds of thousands of Americans who have benefited from taking out ARMs, so it just might be a good fit for your lifestyle and your future.

What is an ARM?

An ARM is a mortgage with an initial interest rate that lasts for a few years and then adjusts once a year after that. We're not going to sugarcoat it for you - your interest rate (and monthly mortgage payment) will most likely go up after the ARM's introductory period. By how much? That depends on the real estate market a few years from now, as well as the economy in general.

Fortunately for consumers, ARM rates come with a ceiling or cap, ensuring that your rate won't spiral out of control at the end of the initial rate period. However, there are some exceptions to the rate cap guaranteed by an ARM agreement.

An ARM is more of a calculated risk than a gamble, but it can be very rewarding in the long run - or we should say - in the short run. This something we'll have to explain later, though.

All ARMs are based on a 30-year loan term, and that's one of the few constants in this type of home financing. The length of the initial rate, the interest rate afterward, and the value of your home are all subject to change.

The Most Common Reset Points

Let's call the initial period during which time your introductory rate is preset the “honeymoon period.” The average one lasts about 5 years, but you can hammer out any deal you want, so long as the total loan period works out to exactly 30 years.

After the honeymoon period, your interest rate and monthly payment adjusts to the going rate. This is called the reset point, and it can play a big part in your ARM's success.

For example, in what is commonly called a 7/1 ARM, your interest rate is preset for seven years, then adjusts once a year for the next 23 years, for a total of 30 years. Similarly:

Which option to choose (if your lender offers you a choice) depends on how long you plan to live in the home and what you perceive your income will be in the near future. 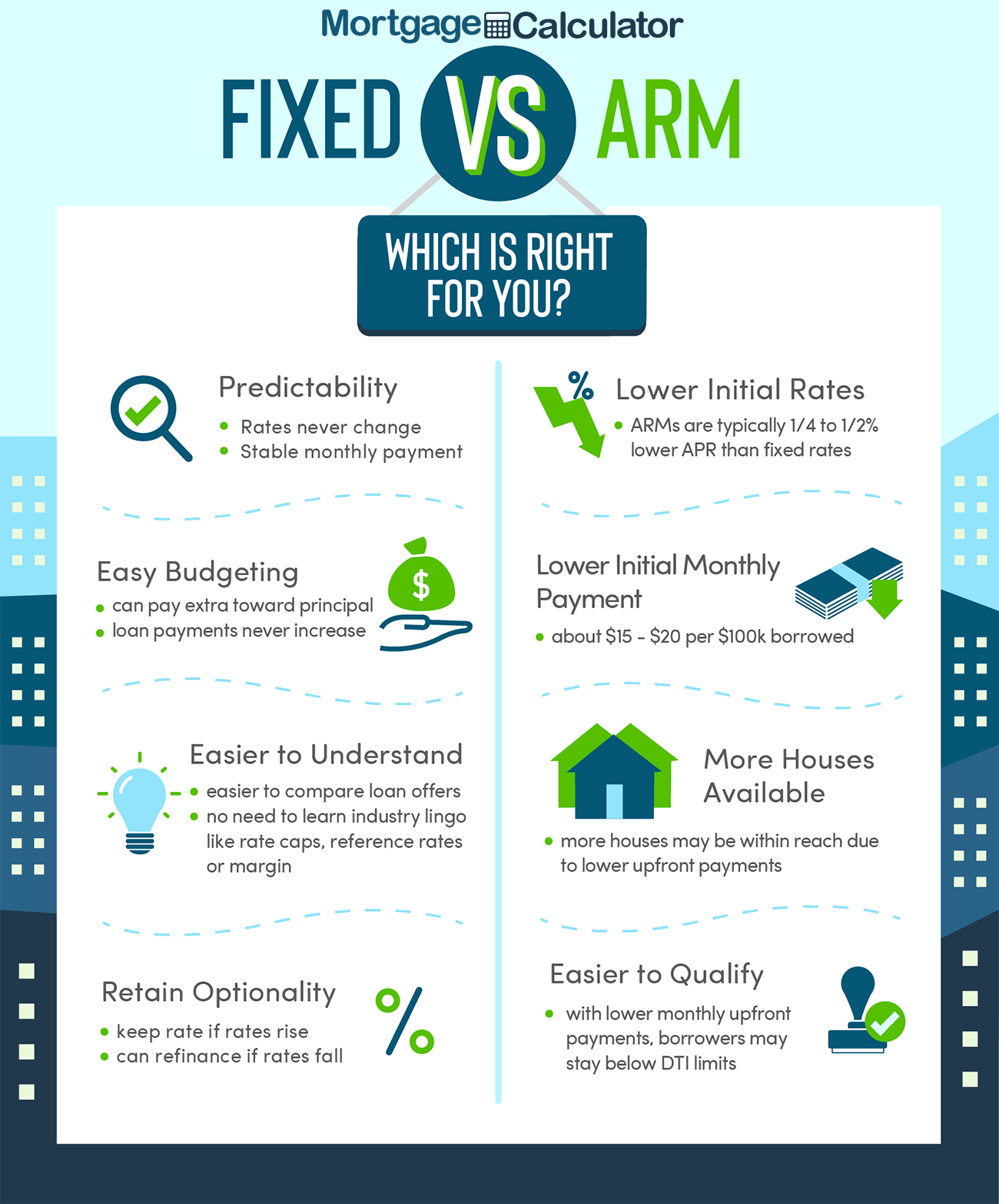 Some home buyers use an adjustable-rate mortgage to get a lower initial mortgage rate and aggressively pay down principal with extra payments, but many well intending people who try to do that find ways to spend the extra money each month and make the minimum monthly payments.

The ARM initially saves you $125 a month, or it allows you to borrow more money. Which mortgage arrangement is best for you depends on many variables, and while you can try and search the web for the answer, some advertised rates differ from offered rates.

There's only one way to test the waters. Sit down and talk to at least two different lenders. They will be happy to look at your situation and explain the process and your options.

Who Are They Good For?

ARMs are good for people who are adventurous and optimistic. These people are either young or young at heart. After all, ARMs are definitely not for the faint-hearted.

If you're happy-go-lucky and you can roll with the punches, an ARM can put you into a bigger house than a 30-year fixed-rate mortgage. It also helps if you foresee a windfall of money down the road a little, like a business venture that will pay off soon or a guaranteed promotion in the coming months.

Yes, the rates after your initial fixed period can be jaw-dropping, but hey, you've got the coolest house on the block, it's near an unbelievably high-rated school, and it has a smart garage door opener.

Besides, if the interest rates happen to drop (like you're gambling they will), you're all set. You're as snug as a bug in a rug, my friend. You can just look out your window and see your fixed-rate neighbors scrambling like madmen to refinance their mortgages.

Who Are They Bad For?

ARMs are bad for worrywarts. You can worry about the future of the economy as much as you want, but you can't change it. If you like security and the ability to settle into a comfortable routine with no surprises, or if your idea of taking a major financial gamble with your money is changing the background design on your checks, an ARM is not recommended.

If you plan to live in your house for all or most of the 30-year period of a fixed-rate mortgage or if you're on a fixed income, an ARM is to be avoided at all costs. As mentioned, the likelihood that your interest rate will go down after the initial fixed period is slim, so you would need to be comfortable with that eventuality.

Heed the advice of those who have come before you; think twice before you commit to an ARM simply for the fleeting thrill of being able to buy a nicer home. An ARM is a long-term commitment where you may be unsure of what you're getting into.

While there are caps in place for your monthly payments and overall rate increases, there  are usually no caps or limits to how much the first adjustment after the reset point will be. Watch out for that first step - it's a killer!

The benefits & risks of this loan format are similar to those of other ARMs, only more leveraged - since the borrower is not paying on principal. An (IO) loan allows one to:

The drawbacks of a IO loan are: