Before There Were Calculators - A Resource Guide to the Abacus

An abacus is a device composed of beads that slide along rods, which fit into a frame. In ancient times, the abacus was used as a calculator; it aided in performing mathematical processes like counting, addition, subtraction, and multiplication. Calculators and computers are relatively new inventions, rendering the use of the abacus a bit obsolete. However, the abacus is still an important learning device, and can still make complicated calculations easier. 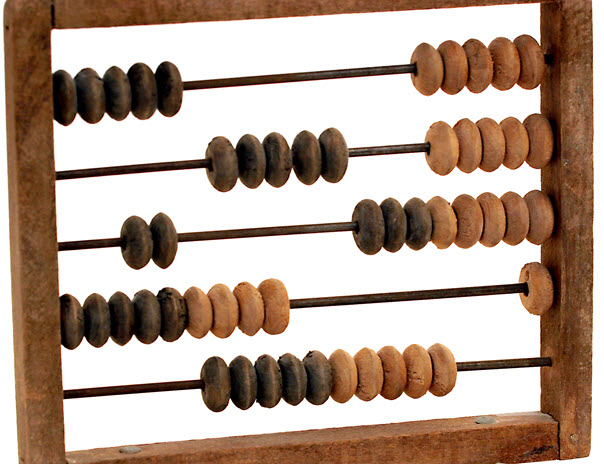 Before the invention of modern calculators, people would calculate by using various counting devices. Early human beings may have used their fingers and toes for some problems. As the earliest civilizations grew, merchants may have used stones or seeds to help them with equations. The beads of the abacus eventually became vital to the trade of goods and services. Other devices used before calculators include the slide rule, Napier's bones, and early machines like Babbage's analytical engine.

The predecessor to the modern abacus was the counting board, which featured groves or lines between which pebbles or beads were moved. The abacus, on the other hand, featured rods, and could have been made out of stone, metal, or wood. Some historians hypothesize that the original abacus was invented in China thousands of years ago, around 500 B.C.E. This device features both an upper and a lower deck with rods and beads, and was called a "suanpan."

The way you use an abacus to calculate depends on the style and design of the tool. A standard Chinese abacus has six rods, an upper deck with two beads on each rod, and a lower deck with five beads on each rod. Every rod represents a place value, with hundred thousands on the far left, ten thousands next, thousands, hundreds, tens, and ones on the far right. All beads begin in the lowest position stacked at the bottom of the abacus. You can count numbers by pushing beads into the farthest up position. For example, to count one, you would move one bead on the lower rack on the far right rod all the way up. To add numbers, you would move beads up on the rack that corresponds with the place value of each number. The number of beads in the up position will show the sum.

A number of abacus designs exist; different cultures and countries used different tools. The Chinese abacus is the classic tool featuring five beads on the bottom and two beads on the top. Russian and Roman designs are also variations of the abacus. The Japanese abacus, called the soroban, is still used today in modern cultures to help people perform mental math.

Use in Modern Society

Some people still use the abacus to calculate sums. Blind people often find abaci useful because these tools enable them to manipulate the beads and feel them to find answers to math problems. Teachers may use abaci with young students to help them learn place value and other fundamental math concepts. Architects working in some parts of the world use abaci to measure dimensions and plan designs. Some expert abacus users can manipulate the beads faster than someone entering numbers into a calculator.

The Japanese abacus is a common tool for mathematical processes. Expert abacus users may achieve impressive calculation speeds by simply imagining the repositioning of the beads instead of actually moving them. This mental math is known as "anzan," which means "mental calculation." Some students spend significant time practicing mental math problems to help them increase speed and accuracy in figuring. By practicing math problems with an abacus regularly, students can expand their math skills. Mastering anzan can enable students to become proficient in math and other academic subjects as well.